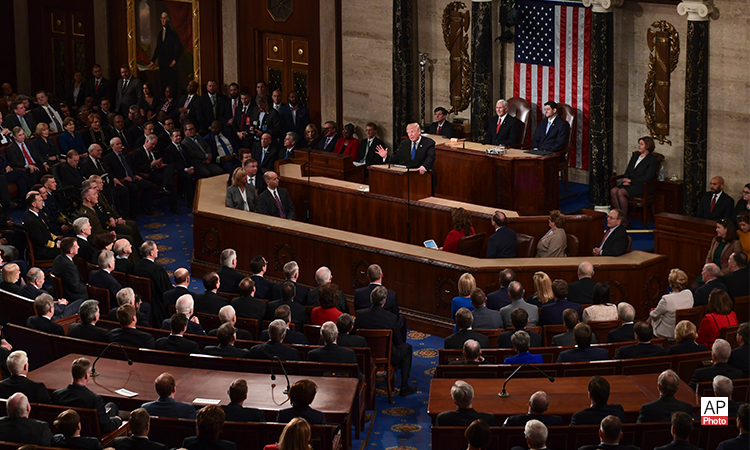 President Donald J. Trump and First Lady Melania Trump are pleased to announce the following special guests, seated with the First Lady, at the President’s first State of the Union Address:

Fred and Cindy Warmbier: Fred and Cindy Warmbier’s son, Otto, was a University of Virginia student when he was detained in the Pyongyang airport in North Korea on the final day of a five-day tour in January 2016. He was accused of sneaking onto a restricted floor of his hotel and attempting to steal a political poster. Otto was sentenced to 15 years hard labor after “admitting” to the crime. In total, Otto spent 17 months in captivity before being released. Upon his release, he was taken by medical aircraft to the United States where doctors acknowledged his severe condition, including that Otto was suffering from extensive loss of tissue in all regions of his brain. Tragically, four days after his arrival in the United States, Otto passed away. The Warmbiers are suing North Korea for wrongful death and have pledged to be a thorn in the side of North Korea.

Ji Seong-ho: Ji Seong-ho is a North Korean defector who grew up during the country’s grueling famine in the 1990s. In order to survive, Ji would exchange stolen coal for food on the black market. While taking coal from a train car in 1996, a malnourished Ji lost consciousness and fell onto the tracks, losing his left hand and foot when a train ran over him. After a painful amputation surgery, Ji was left to fend for himself. In 2006, he escaped to South Korea, where he is now a law student at Dongguk University. Ji is also the president of Now Action and Unity for Human Rights (NAUH), where he helps broadcast information into North Korea and facilitates the resettlement of defectors in South Korea. His most recent work with NAUH involved giving theatrical performances entitled “Kotjebi” in the United States to detail the abuses faced by street children roaming around the markets of North Korea.