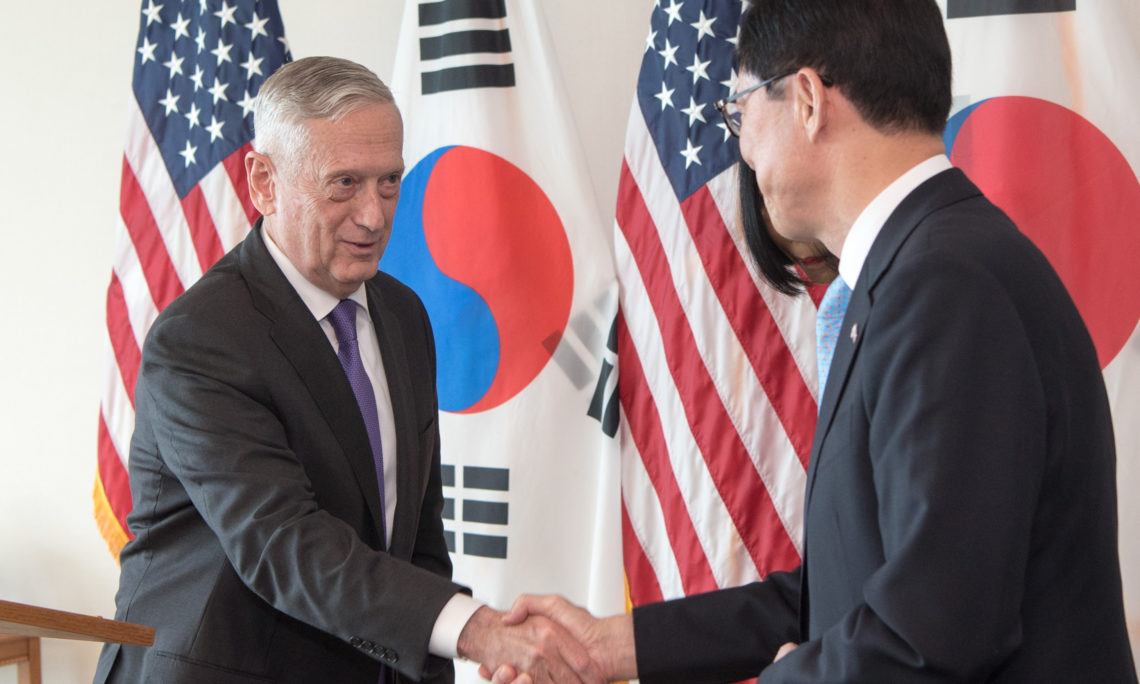 Defense Secretary James N. Mattis and South Korea Minister of National Defense Song Young-moo reaffirmed the strength of the U.S.-South Korea alliance and the mission to defend South Korea and to maintain peace and stability on the Korean Peninsula during a bilateral meeting yesterday at U.S. Pacific Command’s headquarters in Honolulu, DoD officials reported in a statement.

Mattis and Song endorsed the continued strengthening of combined U.S.-South Korea capabilities to deter and defend against the North Korean threat, officials said. They also expressed their commitment to upholding a strong, effective and credible readiness posture to underpin the ongoing diplomatic efforts toward the denuclearization of the Korean Peninsula.‎

The two officials discussed the recent Foreign Ministers’ Meeting on Security and Stability on the Korean Peninsula in Vancouver as an example of such diplomatic efforts, according to officials.

The secretary stressed that any North Korean attack on the United States, its territories or its allies will be met with an effective and overwhelming response, according to officials.

Mattis and Song welcomed the resumed inter-Korean dialogue, which has resulted in North Korea’s participation in the Pyeongchang Winter Olympics, said officials, noting both leaders agreed to closely cooperate to assure a safe and peaceful Winter Olympics.

Mattis and Song reaffirmed their mutual objective of complete, verifiable and irreversible denuclearization of the Korean Peninsula, and agreed to closely cooperate with the international community to ensure that the inter-Korea dialogue, resumed on the occasion of the upcoming Olympic Games, supports this objective, officials said.

The two leaders emphasized that any efforts to drive a wedge in the U.S.-South Korea alliance would fail, officials said. Mattis and Song also committed to close, continued collaboration aimed at making North Korea change its behavior and come to the negotiating table to discuss denuclearization, officials added.

Officials said Song shared the progress made on South Korea’s defense reforms to address changes in the security environment.

Mattis and Song shared their expectation that South Korea’s defense reforms will contribute to enhancement of comprehensive alliance capabilities and will support alliance agreements to prepare for the transition of operational control of South Korean forces, officials said.

Mattis and Minister Song recognize that a deep shared understanding and close bonds between them are essential for development of the alliance, and agreed to seek as many opportunities of direct communication as conditions allow, officials said.