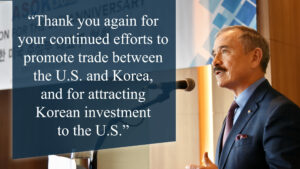 Thank you very much for this certificate of recognition.

First, congratulations on an impressive 30-year Anniversary!  We’re here today to celebrate the foresight that the founders of the ASOK had 30 years ago.  From the five founding member states — Alabama, Alaska, Georgia, Missouri and Wisconsin — you’ve grown to now include 17 states/counties and ports, including my home state of Tennessee.  It’s all quite impressive and is evidence of the importance that Korea plays in your respective economies.

I understand that we have three of the founding members with us today, Mr. Jinwon Kim, Mr. Peter Underwood and Mr. Ken Yang are original members.  Thank you, gentlemen, for 30 years of hard work and partnership.

It’s no surprise that ASOK’s founding came on the cusp of significant economic growth here on the Peninsula.  Your states recognized early on what was happening here and the benefits that would come through partnering with Korean firms.

The numbers reflect this.  In 1988, Korea exported $60 billion dollars’ worth of goods worldwide, including $20 billion to the United States.  By 2018 (30 years later), Korea was exporting $604 billion dollars’ worth of goods overseas and $74 billion to the U.S.  That is a ten-fold increase in total exports and a 200% growth rate for exports to the United States.

The phenomenal development we see throughout Korea today is in large measure due to the efforts started 30 years ago by the individuals of this organization.  Korea is now home to companies engaged in cutting edge and transformational technologies and leading the way for the 4th industrial revolution.

I often meet with your governors and I enjoy sharing with them the role you’ve played in attracting strong, technologically focused investment.

The United States, of course, is incredibly interested in attracting even more South Korean investors.  I’m pleased to know that we are working side-by-side with you in educating Korean companies on the benefits of investing in the United States, and how to get started.

The top 6 reasons why investing in the U.S. makes good business sense is as follows:

Last year, it was an honor to accompany over 100 South Korean business representatives to the SelectUSA Summit, the largest investment seminar hosted in the United States.  The delegation was the largest to date from Korea, and the second largest at the Summit. Many of those in attendance today joined me in that delegation. I take great pleasure in announcing that I will lead the delegation again this year, and I look forward to seeing you and your business communities in Washington this June.

To everyone who took the time to be here today, thank you again for your continued efforts to promote trade between the United States and Korea, and for attracting Korean investment to the United States.  And, thank you, for this certificate…it is a privilege to be able to work alongside you, and lead the ROK business delegation to the 7th SelectUSA.