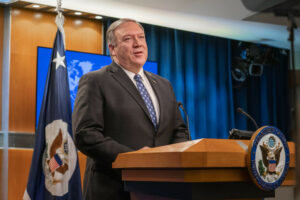 QUESTION:  Mr. Secretary, it’s an election year, and you’re now facing two nuclear-related crises in – with Iran and North Korea.  Are you optimistic about resolving either of those without them sort of blowing up, so to speak, at inopportune moments?

And on the Iran front, Iran’s breakout time when you came into office was considered to be about a year.  Is it now longer or shorter?

SECRETARY POMPEO:  I’ll leave it to the intelligence team to talk to you about the details of Iran’s breakout time for the moment, but President Trump could not be more clear.  On our watch, Iran will not get a nuclear weapon, and as we came into office, Iran was on a pathway that had been provided by the nuclear deal, which clearly gave them the opportunity to have those nuclear weapons.  We won’t let that happen.

As for the first question, which was more broadly, what President Trump laid out is a national security strategy, with respect to both North Korea and Iran, is the plan that we have executed, the strategy that we have executed for this past three years.  We have put Iran in a place that it has never been before, where they’ve had to make some very difficult choices – choices about how to pay for and underwrite their proxy militias around the region, whether and how to build out their missile program.  This is a flip from where we were eight years before.  It’s not political.  Previous administration made a different choice.  They chose to underwrite and appease.  We have chosen to confront and contain.  Those are different strategies.  We believe ours is successful, and we ultimately believe it will be successful at making Iran behave like a normal nation, will deny them the capacity to build out their nuclear program and threaten not only Americans and our lives – to keep Americans safe, which is our mission set – but also to create enhanced stability throughout the Middle East.  We’re confident that that’s the case.

On North Korea, which you asked about, we still are hopeful that we will be able to head down a path.  I was here with you all in December sometime when there was lots of talk about what might happen at the end of the year.  We’ve not seen that yet.  We still remain engaged and hopeful that we could have a conversation about how to get the denuclearization that Chairman Kim promised to President Trump back in 2018.  [Full Text]