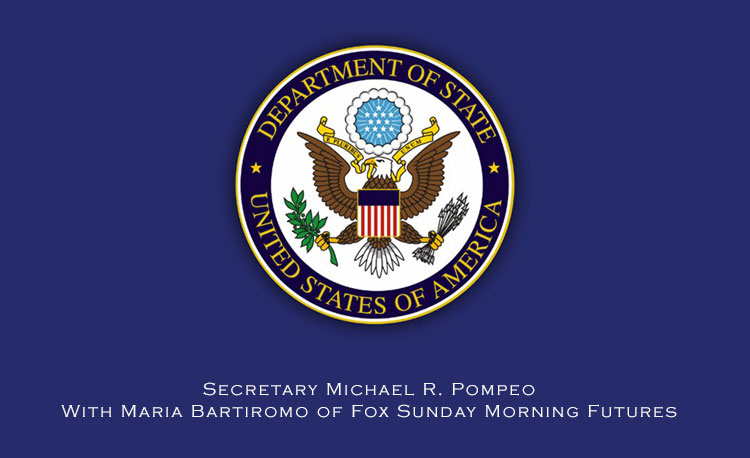 QUESTION: Joining me right now is the Secretary of State, Mike Pompeo. Mr. Secretary, thanks very much for spending the time this morning

SECRETARY POMPEO: It’s good to be with you, Maria. Thank you for having me on this morning.

QUESTION: You said this – you said this weekend the Soleimani was traveling for the purpose of building out what they were referring to as the “big attack.” Can you tell us more about that threat? Are American interests still at risk?

SECRETARY POMPEO: Yes, ma’am. The statement that I made that day was accurate. We need no look – look no further than Soleimani’s actions at the end of December, where he killed an American, to know that he not only posed the risk that we all know about from Lebanon and from Syria and the hundreds that were killed in Iraq, but a continuing risk that’s killed – resulted in the death of an American on December 27th.

He was, in fact, traveling in the region. He was in Baghdad, where we struck him, traveling outside of Iran, continuing to plot, to build out attacks that would have threatened American lives. President Trump saw that, saw that information, knew the history, knew that Soleimani was a terrorist designated by the United States, and took action to reduce that risk to the United States of America.

QUESTION: Iran is vowing retaliation this morning, as you know. Specifically, a former military leader, and now the main military advisor to the ayatollah, we understand, in an interview, said that the response, for sure, will be military and against military sites. What kind of retaliation are you expecting?

SECRETARY POMPEO: Maria, we’re preparing for all kinds of various responses. You’ve seen the work that we’ve done to enhance our posture in the region by flowing increased military troops. We’re also taking action to protect, to preserve our cyber security systems to make sure that they’re as prepared as possibly can be. My team, my diplomats around the region, are also doing everything they can to make sure that those sites are prepared for what Iran may do by making a mistake in coming after them. I think President Trump’s statements are pretty clear. Should the ayatollah make the mistake of coming after an American interest, the response will be swift, it will be decisive, and it will be costly.

QUESTION: You’re getting a lot of pushback, you know, on the left this morning. Nancy Pelosi is saying that the President carried out a strike on an Iranian commander without authorization. She wants details. You’ve got everybody from Alexandria Ocasio-Cortez calling it a war crime, threatening to target and kill innocent families, she writes, “which is what you’re doing by targeting cultural sites, does not make you a tough guy, it does not make you strategic, it makes you a monster.” Even Colin Kaepernick is weighing in here. What is your response to these criticisms coming out of the left?

SECRETARY POMPEO: I’m pretty focused on making sure we’re doing all the things that President Trump wants us to do to keep our forces safe and to build out on our strategy, our diplomatic, economic, and security strategy.

Look, as for these critiques, President Trump didn’t say he’d go after a cultural site. Read what he said very closely. We’ve made clear that the cost – if they use proxy forces in the region – will not be borne just by those proxies. They’ll be borne by Iran and its leadership itself. Those are important things that the Iranian leadership needs to put into its calculuses – calculus as it makes its next decision. President Trump has been unambiguous. We will defend America. We will protect America. We will preserve America.

As for Speaker Pelosi, she’ll have the information she needs. In fact, she’s welcome to come to Washington and receive it. We hope that she’ll take it on. I don’t think any reasonable person can read both the history of Soleimani and the intelligence that we had in our possession and conclude anything other than what President Trump concluded, and as General Milley, I think, characterized it, we would have been culpably negligent had we not taken that strike when the opportunity presented itself.

QUESTION: Right. And in fact, Soleimani was deemed a terrorist by the Bush administration, by the UN, by the EU, by the Obama administration. So the question comes up: Why now? Nothing was done in any of those prior administrations. I want to look at this map of Iran’s partners and proxies, because the U.S. military bases in these countries apparently should be concerned about the people stationed there. Should we be concerned that this is where the focus is in terms of a retaliation on any bases we have in our proxies, the proxies and partnerships of Iran?

SECRETARY POMPEO: Yes, Maria. We think there is a real likelihood that Iran will make a mistake and make a decision to go after some of our forces, whether they’re the military forces there in Iraq or our soldiers that are in northeast Syria. We have many troops in the region. It would be a big mistake for Iran to go after them, but we are preparing. You’ve seen the Department of Defense take their actions. You’ve seen the State Department do its work to build out our coalition partners. I’ve been on the phone for weeks, and intensely over the past few days.

Our partners in the region know what America did was a good thing. It reduced risk in the region. It reduced the threat from – of instability that the theocrats in Iran have imposed on the Middle East for so many years. And as for what previous administrations chose to do with Mr. Soleimani, I can’t speak to what their calculus was. Our intelligence made very clear that the risk was much greater if we did nothing than if we took the action that we took last week.

SECRETARY POMPEO: It’s absolutely the case that each of them presents some challenge to the United States but in very different ways. The efforts we’re making to push back to counter the Iranian efforts are very different than what we’re doing with respect to Russia and China today. That’s appropriate given the National Security Strategy.

But with respect to crude oil, the Iranians were delivering under the nuclear deal some 3 million barrels a day and getting rich. The very Shia militias, the bullets they’re using, the pay that the soldiers are getting that are putting Americans at risk, are a direct result of that bad nuclear deal. The fact that the Europeans were permitted to trade, the fact that America provided billions in cash to the ayatollah, that’s precisely what President Trump came into office having to face. We’re pushing back against it, and it is the case today that fewer than half a million barrels a day are being delivered out of Iran. We’ve crippled their economy.

They’ve never been in this position, Maria. Iran has never been in a place where they’ve been challenged not only economically but diplomatically with a global coalition that in May of last year put out a united statement against Iran. This is a challenge and a strategy that President Trump has laid out that we’re executing with great vigor, and it will protect and preserve and defend the American people.

QUESTION: So when the President says 52 targets, among those targets then would be Iran’s oil facilities, their bread and butter?

SECRETARY POMPEO: I don’t want to get into what President Trump may choose to target. I’ll leave his statement to stand. The Iranian leadership needs to understand that we are hopeful they will make a good decision and not pose threats to the American people or American interests. But if they do choose to go down that path, we will respond decisively.

QUESTION: Secretary, it’s good to have you this morning. Thanks very much.

SECRETARY POMPEO: Maria, thank you, ma’am. Have a good day.

QUESTION: And to you. Secretary Mike Pompeo joining me.