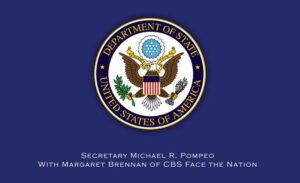 QUESTION: We turn now to Secretary of State Mike Pompeo. Good morning to you, Mr. Secretary.

SECRETARY POMPEO: Margaret, good to be with you. Thanks for having me on the show this morning.

QUESTION: Does eliminating Qasem Soleimani take out the specific plot that you say was an imminent threat?

SECRETARY POMPEO: Margaret, we made the right decision to take out this terrorist. He’d not only caused enormous death and destruction throughout the region, killed hundreds of Americans over the years, but had done so in the past couple of days, killed an American on December 27th. We watched him. We watched him continue to actively build out for what was going to be a significant attack – that’s what we believed – and we made the right decision.

QUESTION: But has it been eliminated?

SECRETARY POMPEO: There are constant threats. We’ve been under threat from the Islamic Republic of Iran since at least 2015, when the previous administration made the mistake of entering that horrific nuclear deal and gave money and resources to this regime. The threats remain, and we’ll continue to take actions to respond to them.

QUESTION: So Iran can still carry out that specific threat you described as imminent? Is it still imminent?

We have put Iran in a position it has been in before. It is under enormous pressure, and we are continuing to be successful at denying them the resources to conduct precisely the types of campaign that we’re confronting as a direct result of what happened over the past eight years before we came into office.

QUESTION: Up until this point, the U.S. had avoided specifically targeting and taking out top Iranian military leaders. Were all of the President’s national security advisors in full agreement that Qasem Soleimani needed to be killed?

QUESTION: Complete agreement across the cabinet?

SECRETARY POMPEO: It was a collective decision. It was intelligence analysis that doing nothing created far more risk than the action that we took.

QUESTION: But doing nothing isn’t the same as saying specifically Qasem Soleimani needed to be killed.

SECRETARY POMPEO: Margaret, there was unanimity that we were making the right decision that day. It was based not only on this intelligence, but you need to look no further than the days that led up to this. Qasem Soleimani led and orchestrated a Kata’ib Hizballah attack on an American that killed an American. There was sound and just and legal reason for the actions the President took, and the world is safer as a result of the bold action that President Trump took.

QUESTION: President Trump is saying that there are 52 sites that the U.S. would target if Iran retaliates. How is that consistent with what you say is your message of de-escalation?

SECRETARY POMPEO: The Iranian leadership needs to understand that attacking Americans is not cost-free. Setting out conditions to say these are our expectations, these are the things that America is expecting from you, and if you don’t do them the costs will be clear and direct. And we have an obligation to speak to the Iranian leadership clearly and directly so that they understand that America is prepared, that we will continue to keep the American people safe, that we will reduce threats throughout the region if they take certain actions.

So they’re entirely consistent. The entire strategy has been one of deterrence, to convince the Iranians that it would be so costly, and to support the Iranian people so that they could see that what their leadership was doing was destroying their country. We’ve been very effective at this —

QUESTION: But they’re not backing down. Why do you think that this will make them back down? If this such a threat to Iranian pride to have one of their most powerful leaders killed, doesn’t it force them —

SECRETARY POMPEO: Qasem Soleimani killed hundreds of Americans. To take a terrorist off the battlefield does not increase the risk of terror. The risk of terror is increased by appeasement. That’s what the Obama-Biden administration did. It’s what President Trump will never do, Margaret.

QUESTION: He also killed thousands of people in the region. He directed mass murder.

QUESTION: But does this mean other Iranian leaders are now potential U.S. targets?

SECRETARY POMPEO: We’re going to do everything required to keep the American people safe.

SECRETARY POMPEO: We’re going to do, under President Trump, what he has directed for months. We’re going to execute our National Security Strategy and convince the people of Iran that we are with them, that the Islamic Republic regime leadership – that their terrorism will not benefit them.

QUESTION: Iraq this morning has been carrying out some votes and debate over the presence of U.S. troops, and now the question is if Iraq legally requires – this is what they’re looking at – U.S. troops to leave, will the U.S. comply?

SECRETARY POMPEO: Margaret, I don’t want to speculate about what the Iraqi leadership will do. We’ll watch. We’re following very closely what’s taking place in the Iraqi parliament. Make no mistake about it. The Iraqi people too are protesting, but not against America. What you see on TV is happening at the direction —

QUESTION: But this is a prime minister of Iraq who is —

QUESTION: — talking about this right now.

SECRETARY POMPEO: Having the —

SECRETARY POMPEO: The acting prime minister of Iraq, who resigned because of massive Iranian interference in his own government’s ability to execute sovereignty and independence for Iraq. It’s why he left. And it is the United States —

QUESTION: But the Iraqi parliament has now voted to approve it.

SECRETARY POMPEO: It is the United States that is prepared to help the Iraqi people get what it is they deserve and continue our mission there to take down terrorism from ISIS and others in the region that is in defense of the Iraqi people and is good for America too.

QUESTION: So I hear you saying the U.S. wants to keep those troops there and will work on that. What are you doing diplomatically behind the scenes to try to de-escalate?

SECRETARY POMPEO: Well, it’s not just behind the scenes. We’re doing some of it publicly too. The messages —

QUESTION: Have you reached out to the regime in Iran?

But it’s not just the last few days, Margaret. This is something we’ve been working on for an awfully long time. We’ve built out an enormous coalition – Gulf states, Israel. We’ve built out a maritime coalition. We’ve got an air defense initiative that is a multi-country effort. We’ve flowed American forces, but we’ve had forces coming in from our European friends and partners as well and the Canadians. This is a multi-country, global diplomatic effort to deter Iran.

QUESTION: But for the first time since World War II, the U.S. has now taken out a foreign military leader on foreign soil. This is —

QUESTION: He may be, but this is a significant action. Do you really believe that Iran’s going to sit down and negotiate now?

SECRETARY POMPEO: It depends how smart they are. It depends how much they take seriously what President Trump has communicated. If they take it seriously, they’ll do the right thing; they will not continue to threaten not only Americans but the entire region. The instability that they have created for our ally Israel, for our partners the Saudis, our friends the Emiratis, all of these countries – Soleimani and his band of merry brothers have been a negative influence in the region for an awfully long time, and they are thankful for the action that America took.

QUESTION: The details of the threat that you describe as imminent, and it sounds like you were also saying is ongoing, have not been shared with Congress. The details that were transmitted yesterday were kept classified. When will the American people know why President Trump decided to do what he did?

SECRETARY POMPEO: Margaret, those aren’t the same thing. You said they have been kept from Congress and kept classified. They have been shared with Congress. The congressional leadership has certainly seen it. Those members who have come back will get to see most all of that same information. I don’t think any reasonable American elected official would see what President Trump and I and Secretary Esper saw and conclude that we could have done anything but the action that we took and —

QUESTION: But will that be declassified and explained to the American public?

SECRETARY POMPEO: — and we – and Margaret, we will do our best. We understand the obligation to share with the American people why it is we’re taking the actions we can, and we will do so. President Trump has done so in tweets. I’ve done so in messages. I’m sitting here with you today, articulating why it is in America’s best interest the action we took.

As for specific pieces of intelligence, you and I both know – I was a director of the CIA – there are things you simply cannot share. There are valuable information streams that we must protect. We will need them in the days and weeks ahead, and we will never present risk to the United States by putting at risk that valuable information.

QUESTION: But to be clear, that threat continues to exist – that plot?

SECRETARY POMPEO: There remain an enormous set of risks in the region, and America is preparing for each and every one of them. That includes not only the threats from the proxy militias in Iraq but in the region more broadly along every vector, including cyber.

QUESTION: Secretary Pompeo, thank you for joining us this morning.

SECRETARY POMPEO: Margaret, thank you very much for having me on.