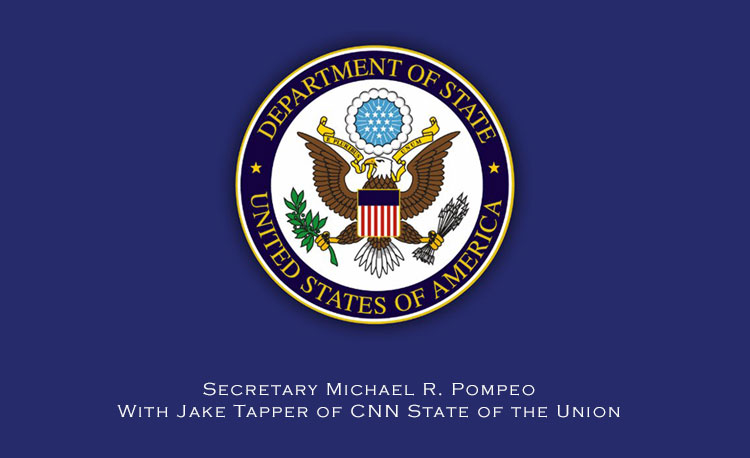 QUESTION: Joining me now, the Secretary of State Mike Pompeo. Mr. Secretary, thanks so much for joining us this morning.

Let’s start about this new threat from President Trump. Is the tweet accurate? Is the U.S. really preparing to hit non-military, cultural targets in Iran, which would obviously possibly result in civilian threats and almost certainly violate a UN resolution that the U.S. voted for in 2017?

What President Trump said last night is consistent with what we have said all along. Iranian proxy forces in Iraq have thought that they could act with impunity and that if they acted we wouldn’t take strikes against Iran proper. We’ve made clear. We’ve made clear for months to the Iranian regime that that wouldn’t be the case, that we were going to hold responsible the actors, the leaders who took these actions and who orchestrated these actions. President Trump’s tweet last night made clear we will continue to do that, and the American people should know we will always defend them and will do so in a way that is consistent with the international rule of law and the American Constitution. We’ve done it before. We will do it again.

QUESTION: Well, you’re saying two different things here, sir, with all due respect, because President Trump’s threat on Iranian cultural centers or centers of interest to the Iranian culture would not be in accordance with international law. So which is it?

SECRETARY POMPEO: Jake, they’re not two different things. I’ve been with President Trump through the entire strategic planning process related to our entire campaign – diplomatic, economic, and military. We’ve built out an enormous coalition to push back against the Islamic Republic of Iran and its kleptocrat – Iran and its kleptocratic regime. The American people should know that we will not waiver. We will be bold in protecting American interests, and we’ll do so in a way that’s consistent with the rule of law. We’ve always done that, Jake, and President Trump’s tweet doesn’t deviate from that one iota.

QUESTION: So cultural centers are theoretically fair targets, in your view?

SECRETARY POMPEO: Jake, we’re going to do the things that are right and the things that are consistent with American law. I’ve been part of the discussion and planning process. Everything I’ve seen about how we will respond with great force and great vigor if the Iranian leadership makes a bad decision. We hope that they won’t, but when they do, America will respond.

QUESTION: You’ve said you hope that this strike de-escalates the situation. President Trump is obviously now threatening, in capital letters, to hit Iran very fast and very hard. That does not seem like de-escalation.

SECRETARY POMPEO: Jake, we’re trying to restore deterrence that, frankly, is a need that results directly from the fact that the previous administration left us in a terrible place with respect to the Islamic Republic of Iran. Team Obama appeased Iran, and it led to Shia militias with money, Hamas, the PIJ, hundreds of thousands of Syrians killed by Soleimani himself. This was the place we found ourselves when we came in, and we have developed a strategy to attempt to convince the Iranian regime to behave like a normal nation. That’s what our strategy is about. We have been executing it. We will continue to do so. We have every expectation that we’ll ultimately achieve that goal.

QUESTION: Do you think President Trump threatening to attack 52 sites in Iran, one for each one of the Iranian hostage – I mean the American hostages taken by Iran in 1979 is de-escalating, is providing an off-ramp for the Iranians?

SECRETARY POMPEO: We have provided them clear guidance about what it is we have as an expectation. We have worked with them. We’ve tried to have conversations with them. It is important that they understand that America will no longer behave the way that it did during the Obama-Biden administration. We will no longer appease. We’ll no longer tolerate.

Frankly, this war kicked off – people talk about the war. This war kicked off when the JCPOA was entered into. It told the Iranians that they had free rein to develop a Shia crescent that extended from Yemen to Iraq to Syria and into Lebanon, surrounding our ally, Israel, and threatening American lives as well. We’ve taken a very different approach. That approach has been successful. There’s obviously more work to do, Jake.

QUESTION: The Trump administration is privately warning members of Congress that Iran is expected to retaliate within weeks. Here’s just some of what’s happened in the last 72 hours. The U.S. has told all Americans to immediately leave Iraq. The U.S. is sending thousands of additional U.S. service members from the 82nd Airborne to Kuwait. Soleimani’s deputy has been appointed to replace him. The German Government has raised its threat level. The British Navy is now accompanying UK ships in the Strait of Hormuz. The U.S. is bracing for possible Iranian cyber attacks. Yet you’ve said that “The world is a much safer place today.” Now, I can see you making the argument that the world will be safer in the long term, but how can you say we are safer today, given the increased and heightened threat level?

SECRETARY POMPEO: Jake, my reference was very clear to the strategy that the Trump administration had laid out. The Middle East was unstable. We are creating a place and an opportunity for that stability. We’ve done so by building out coalitions. We’ve done so working alongside our friends and partners. We’ve done so by making it very clear to the Islamic Republic of Iran that we weren’t going to accept their rogue behavior in the way the previous administration did, and we’re going to protect and defend the American people.

I am convinced, and I think General Milley had it right. He said we would have been culpably negligent had we not taken that strike against terrorist Soleimani. We’ll continue to do those things that reduce risk to America. I know that the risk to America over the long run is much reduced as a result of the actions President Trump and our administration has taken in these last three years.

QUESTION: Okay. That’s in the long run, but I’m talking about the short term. Let me ask you just a question. Do you know for a fact that the mission that Soleimani was working on, you say, the attacks that you say he was planning, have they been called off – those attacks?

QUESTION: Let’s talk about why you carried out the strike, the intelligence behind it all. Some members of Congress and others who have been briefed on the intelligence say they have not seen sufficient evidence to conclude that the attack you referred to, the attack on Americans, was actually imminent, as you have claimed. When do you plan to share evidence with Congress, with the American people, to clear up any questions here?

SECRETARY POMPEO: Well, the intelligence has been shared with leaders in Congress already, and we’ll continue to share that. We’ll go up to Capitol Hill and brief them yet again this week, I expect. But the American people have the evidence right in front of their eyes. We don’t have to guess about what Soleimani was up to. We know what he did on December 27th. He killed an American. And we know what he’s done for years and years and years – killed hundreds of Americans.

SECRETARY POMPEO: If you’re an American in the region, days and weeks – this is not something that’s relevant. We have to prepare. We have to be ready. And we took a bad guy off the battlefield. We made the right decision. There is less risk today to American forces in the region as a result of that attack. I’m proud of the effort that President Trump undertook. And the execution by our military was phenomenal, and the work that’s been done by our diplomats in the region to prepare and to work diplomatically in the region has been powerful, important, and effective.

QUESTION: I keep coming back to the fact that you keep saying it’s safer now, even at the same time that the U.S. Government is telling all Americans to leave Iraq. I mean, again, I understand the idea that in the long term the region could be stable.

SECRETARY POMPEO: You don’t seem to, Jake. You don’t seem to understand that. Oftentimes I’ve heard you say, Jake, America thinks just about the moment and doesn’t think about the long-term strategic implications. This administration —

QUESTION: I don’t know that I’ve ever said that about America.

QUESTION: I’ve certainly said that about leaders of this country.

SECRETARY POMPEO: Yes, sir. This administration is thinking about exactly that. We are setting the conditions for a successful and safe America, a prosperous America at home, a secure America abroad. This is our Middle East strategy. It’s what we’ve done over these last three years in Iraq and in pushing back against the Islamic Republic of Iran. We will not stray from that course, Jake.

In addition, obviously, this nation has heard leaders – whether it’s blaming a YouTube video for the attacks on the embassy in Benghazi or WMD in Iraq, people have heard this government, the Government of the United States, say things to them that were not true when it comes to the war. Do you understand that there might be a special responsibility to provide proof and evidence to the American people of the imminence of the attack, of the need to carry out the mission that you carried out?

SECRETARY POMPEO: Jake, I do understand the power that we have and the need that we have to try and share with the American people everything we possibly can about why it is we’re taking the actions that we take, and we’ll do that. We’ll continue to do everything we can, consistent with protecting our sources and our methods and our – importantly, our capacity to continue to see and to understand what’s going on in presenting threats. We don’t want to risk that intelligence. I spent a little bit of time as the Director of the Central Intelligence Agency. We never want to put that at risk.

But as the Secretary of State, I also know my solemn obligation to make sure we share with the American people everything we can about why it is we’re taking the actions and how it is we expect that we will deliver to protect and defend America each and every day, Jake.

QUESTION: Well, we look forward to learning more about that evidence. Secretary of State Mike Pompeo, thanks so much for joining us today.

SECRETARY POMPEO: Jake, thank you, sir. Thanks for having me on today.